Jarrod started getting his hair cut at Dave’s the day after we opened. 15 years later he has transitioned from client to Barber. He is a Leo, his 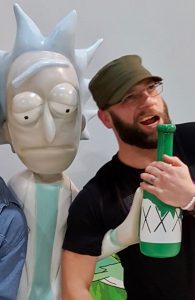 favorite color is blue and his hobbies are petting kittens and cutting down trees. Just a little something for his soft side and his hard side. 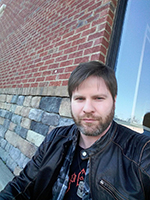 Jason attended the Roffler Barber College in Marrietta, GA. Jason keeps up with all of the current haircut trends and video games.

Dave was born in Dallas, Texas. He spent 3 years growing up in the Marshall Islands of the South Pacific and ended up graduating from Trinity Prep in Winter Park, FL. David studied fine art and ceramics at Florida State University. Then he and his mother created a line of ceramic dinnerware as Clay and Color Studio. They spent 10 years successfully selling their ceramics all over the country. David then went to Roffler and graduated with a Master Barber License in 2002 and opened his own shop, Dave’s Barber in July of 2006. You can see all of Dave’s hobbies displayed throughout his barber shop such as the remote control planes he builds and flies, pieces of his fused glass, and other models he has built. David is also a proud father to his daughter, Jasmine and his son, Isaac.